Whether it's an afternoon amble among the green hills and mountains of the Spanish Pyrenees or a searing finish in the Vuelta a Espana, the Basque country's rich cycling heritage is present in every BH bicycle. BH, which stands for Beistegui Hermanos (Beistegui Brothers), was formed in 1909 by Juan and Cosme Beistegui. Located in Elbar, Spain, BH manufactured firearms until 1923, when the Beisteguis took their strong metalworking abilities and turned their focus to producing bicycles. 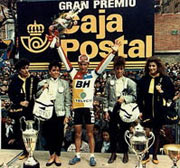 In those days, cycling attracted the hearty, rugged, hard-working mountain men of the Basque country, and BH built bicycles designed to go up, down and around mountains with awesome efficiency. In 1959, BH relocated to Vitoria-Gastiez, Spain, where they remain to this day.

BH's racing history is almost as old as the company. Team BH, made up of BH employees, was one of the first professional teams and won the first two Vueltas a Espana in 1934 and 1935. BH bikes have since won the Vuelta three more times, and in 1987, Federicio Echave, riding a BH, was the first Spaniard to win the famed Alpe d'Huez stage of the Tour de France.

Today, BH continues to have a strong presence in the international race scene. And, all this feedback from over 70 years of competition has helped BH remain on the cutting-edge of design and innovation. 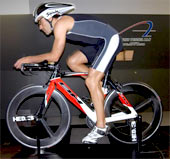 For example their carbon frames use finer composite materials and a greater number of carbon layers that are molded with a higher level of compaction to deliver a level of sprinting, climbing, and cornering stiffness that exceeds that of their Pro-Tour competition. Their precision molding process enables maximum strength-to-weight ratio while tuning every aspect of the ride — nothing short of brilliant.

With their rich cycling history and advanced designs, every BH bicycle delivers endless miles of pedaling bliss. Whether you're looking to add a little spice to your favorite loops, enjoy centuries more than ever or dominate at the races, BH has the right ride for you! Experience the rich heritage and awesome ride of BH soon by visiting our store and checking them out in person.